Joyce Frankland Academy Newport Presents We Will Rock You 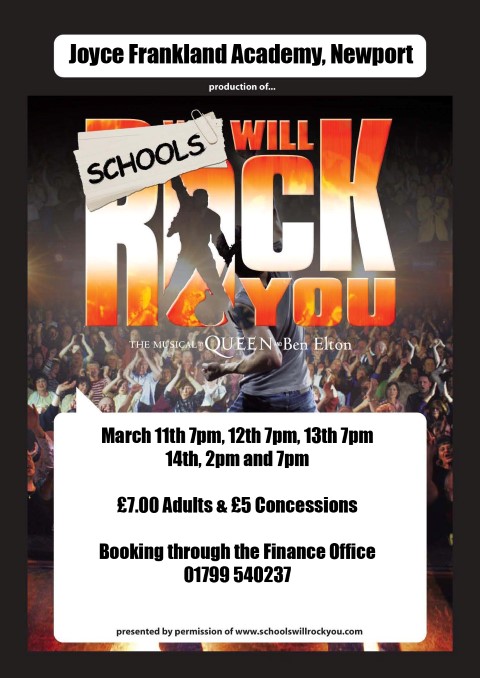 Ben Elton's hit musical We Will Rock You, will kick off on the 11th of March 2015 paying homage to Freddie Mercury and the ever popular band Queen.

The role of Scaramouche is being performed by Year 11 student Lydia McGrath, who recently played Maria in West Side Story at the Rhodes Theatre in Bishops Stortford. She will be performing opposite fellow Yearr 11 student Nic Carsberg who is playing the role of Galileo.

The story goes that Galileo, the reluctant hero tries to make sense of the long forgotten music which he hears in his dreams. The outrageous role of Killer Queen will be delivered with glitz and glamour by Year 12 student Marie Deane and Toby Jones in Year 13 will play the intimidating leader of the Super Yuppies - Khashoggi. Tia Jackson-Owens in Year 11 has taken on playing the role of Meat, and young Haydn Watts in Year 9 as Britney Spears. They promise to have the audience rocking in their seats as they deliver their rendition of "We Want It All" and "Crazy Little Thing Called Love!". Dressed in a tie dye T-shirt and faded denims, Aaron Sims promises to guide us through this fabulous journey, with humour, likeability and warmth in the role of the aging hippy Pop.

The lead characters will be supported by a fantatstic chorus of 45 cast members playing Yuppies, Ga Ga kids and Bohemians.

The play is scheduled for the 11th, 12th, 13th and 14th of March and promises to be a fantastic extravaganza of light, music, colour and humour!

Tickets can be purchased from the schools finance office.